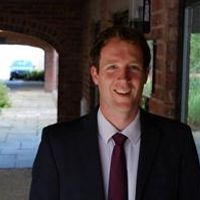 Like the majority of businesses, since our inception, Collingwood has evolved over the past 15 years.  Around six years ago we made the decision to move away from a pay-per-click, enquiry led business model to actively seek clients who wanted to build longer term partnerships. Even if  this forms the shape of a one off assignment, we wanted to take our relationships with clients away from transactional, "there's your CV's" to being a true partner on searching the best talent in the market.

During this transitional time, locally based, national Utility contractor, Matrix Networks, enquired about us working on a newly created Sales Director role for their board.  Back then we were talking with the originator.  Through his team of 50 heads they had increased revenue by 40% over the past five years and planned to add a further 20% inside the next five, thus allowing the owner to sell the business (this went through in March of last year).

Since fulfilling that assignment we have worked on a further 11 positions with the company, covering a variety of levels and disciplines.

Having just added another person to their boardroom, it struck me some of the learnings other businesses can take when looking to partner an Executive Search firm (or recruiters in more general terms).  My thoughts to why this partnership with Matrix has flourished are:

- The initial Sales Director role laid the foundations to our continued success.  Working directly with the main decision maker (owner) he outwardly stated he wanted to build a partnership. To be fair the owner was very true to his word.  This position was tough in that the owner didn't necessarily want someone from main competition, or even allied market.  Sharing intelligence from where, who and how Collingwood were approaching the market was key.  This led to objective decision making from both parties, with the owner taking time to introduce fellow board members, thus allowing Collingwood to build a picture of, culturally, what made for a strong Matrix person.  Feedback on interviews were also comprehensive, further developing our understanding of what "good" looked like

- BDM's, Design Managers & Project Managers.  Conversely to the above, within all of these multiple location searches, Matrix required someone with direct, relatable experience.  Additionally, although the owner was still involved, decision making on appointments were bled down to the hiring directors.  Importantly, the owner took time to set up meetings with Collingwood, himself and the associated director to explain how was best for them to gain maximum value from partnering us.  Within the Independent Connections Provider (ICP) world in the UK, these disciplines have proven to be in very high demand across industrial and commercial construction project work.  Strong people were and are well looked after and guarded by employers.  Part of Collingwood's job was to weed out the journeymen and those simply looking for a hike in salary.

Additionally, through working on multiple assignments, Collingwood was able to build an exhaustive map of the ICP landscape.  Together with providing real-time intelligence from what the market were saying during the approaching phase, the directors were able to make quick, decisive decisions about the best candidates to move forward with.

- SHEQ Director.  This was a new appointment for the board, after the new investors had come into the business.  Collingwood was tasked with finding someone from the wider Construction market.  Although over 80 regionally based candidates were identified, once Collingwood had been through our interview process, due to the relationship with Matrix, our Head of Building Products & Construction, Mark Goldsmith, was assured the best person had been attracted.  Hay presto, this same candidate was offered and started this month.

- Our Leadership Development arm has worked with Matrix's board on a couple of occasions in aligning objectives in the short to long term, along with developing a number of the members in their strategic approach to scaling the business, whilst leader departments.

Executive Search can be transactional, in others words, "here's your CV's", but are you gaining the best return?  Are you making the most informed decision on who to employ and at what rate to offer?  Some may even prefer this approach, but Collingwood can attest to winning work off such agencies due to a lack of accountability.

And the below testimonial from Matrix's CEO summarises the above perfectly... 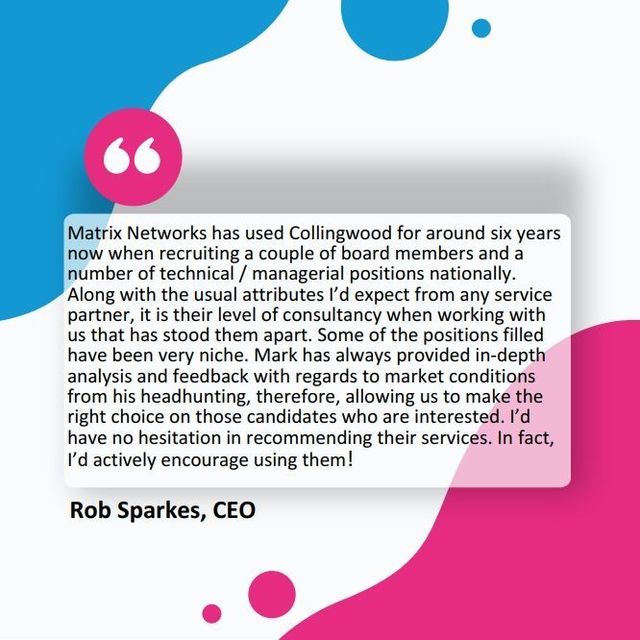 There's no substitute for quality time together
Mark Goldsmith

Competition for the best talent is fierce. Ensure you don't get left behind
Mark Goldsmith

Being absolutely relentless is the key to our success. What is yours?
Doug Mackay

The importance of an open mind-set post pandemic.
Jordan Taylor